At LG Squared, we have experimented with many ways to design and build a roof assembly for a home. Without question, we have found the ventilated attic to be THE most effective.

Jodi and I recently returned from a visit to the high performance home that we designed in the Blue Ridge Mountains, just outside of Franklin, North Carolina, for a retired couple from Atlanta, Georgia, and the attic design is definitely one of the building enclosure features we’re most proud. The advantages are many, but here are a few of the highlights to a ventilated attic, and why it can be the most effective way to build a roof assembly are:

In order for this application to be truly effective, two things must happen.

What we mean by a passively ventilated attic done right involves at least these five best practices.

Let’s start with a closer look at #1, absolutely no gaps, cracks or holes. This is super critical in order to have any chance at getting the most out of the insulation that will eventually be put on top of the ceiling plane. The ceiling MUST prevent the bad air from getting in, and the good air from escaping house. What makes air sealing perfection nearly impossible is when we perforate the ceiling plane with light fixtures, ceiling fans, smoke and carbon monoxide detectors, or an attic access hatch. To avoid this near impossibility for this attic, we moved the air barrier to the top of the ceiling joists, and made sure it was absolutely uninterrupted. We leave the drywall where it is, on the bottom of the joists, and add a sheathing layer, that is continuously tied in to the sheathing on the exterior walls.

Now, it doesn’t matter what we do with the drywall ceiling, the air barrier is separated. This prevents the need for having to deal with any of the leakage through any and all penetrations in the drywall. This is exactly the same way that the exterior wall assembly works, and it is equally important to get the sheathing layer on the exterior wall perfectly air tight. In either case, we’re controlling the air and vapor on the outside. Plus, when we install the continuous insulation on the outside of the wall, and on the topside of the ceiling assembly, we’re controlling heat on the outside, too. This is best practice. This protects the building structure, and the indoor environment, making it much more durable and comfortable. The attic access has been located outside of the thermal boundary, as well, using the porch ceiling as point of access.

With perfectly air tight and continuous control layers, we can install tongue and groove or other types of air permeable finishes more cost effectively, withOUT the need of a secondary “smart” vapor retarder on the backside of the finish to act as an air and vapor control layer, and tediously sealing every penetration. Not to mention, the framers love having the “platform” on top of the ceiling joists to work from when they’re framing the roof!

#2 - There must be more ventilation openings at the soffit, down low, than there is at the ridge, up high.

The next critical best practice is to make sure we have more holes in the eaves, down low, than we do in the ridge vent, up high. This ensures that there is a continuous flow of air on the underside of the roof sheathing. In cold climates, this helps prevent ice dams by keeping the sheathing the same temperature on both sides, in and out. In warm and hot climates this helps keep the attic cooler. In both cases, this positively effects the heating and cooling loads by making them smaller. Having more openings at the eave than at the ridge maintains a slight positive pressure in the attic to help prevent sucking the conditioned air from the house. Of course, if you do a perfectly tight ceiling plane, this sucking won’t happen. Nevertheless, it’s still best practice to “wash” the roof sheathing with air, and have a slight positive pressure in the attic.

Comfy and cozy is what most of us want in our home. So, intuitively, we know that more insulation is a good thing. For our third best practice, we put a looooooooot of insulation on top of the perfectly airtight and continuous air barrier “platform”, and because all the lighting, ceiling joists, fans, etc. are underneath, the insulation is completely uninterrupted. Because of the climate zone this house is in, and because adding ceiling insulation adds so much value for little cost, we went with an R-Value of 60, continuously over the entire ceiling. It’s continuously connected to the exterior rigid insulation on the walls, and is loses very little thickness and R-Value at the perimeter, because we designed in what’s called a “raised heel” to allow thicker over the walls.

#4 - All the mechanical equipment and storage must be kept below that ceiling, and within conditioned space. In other words, inside the thermal enclosure

Our last best practice…also, very critical. It’s also fairly simple to accomplish. Do NOT put the mechanical systems, or the ductwork in the attic. Period. And, do NOT use the attic to store ANYTHING in it. Don’t! It can get to 140 degrees or more in the summer, and is usually just as cold as it is outside in the winter. Neither of these are good for your mechanical systems, you, or your stuff. To achieve this here, we designed the system to originate from the conditioned basement, and used the floor structure between the two levels to put our ductwork. When we designed the house, its structure and its mechanical systems, we made sure to keep the attic for insulation only. Nothing else. Asking your mechanical systems to operate in a ventilated attic, especially in winter, is much like asking you heart to operate outside of your body. You simply wouldn’t do that. It would have to work a lot harder to keep going, to keep the blood flowing and to keep you warm.

Well, that’s that. The most effective and efficient way to design and build a roof assembly is with a vented attic, when done right. Make it air tight, put more ventilation openings down low than up high, put in the right amount of uninterrupted insulation, and do NOT put your HVAC Systems, or your Christmas decorations in the attic.

Starting at the bottom of that list, when we designed the HVAC systems for this home, we put them in the conditioned basement, so that all the ductwork runs in the floor system between the two levels of the home.

BOTTOM LINE: No better, more effective way to build a roof assembly than to have vented attic. It works in every climate zone in the world. 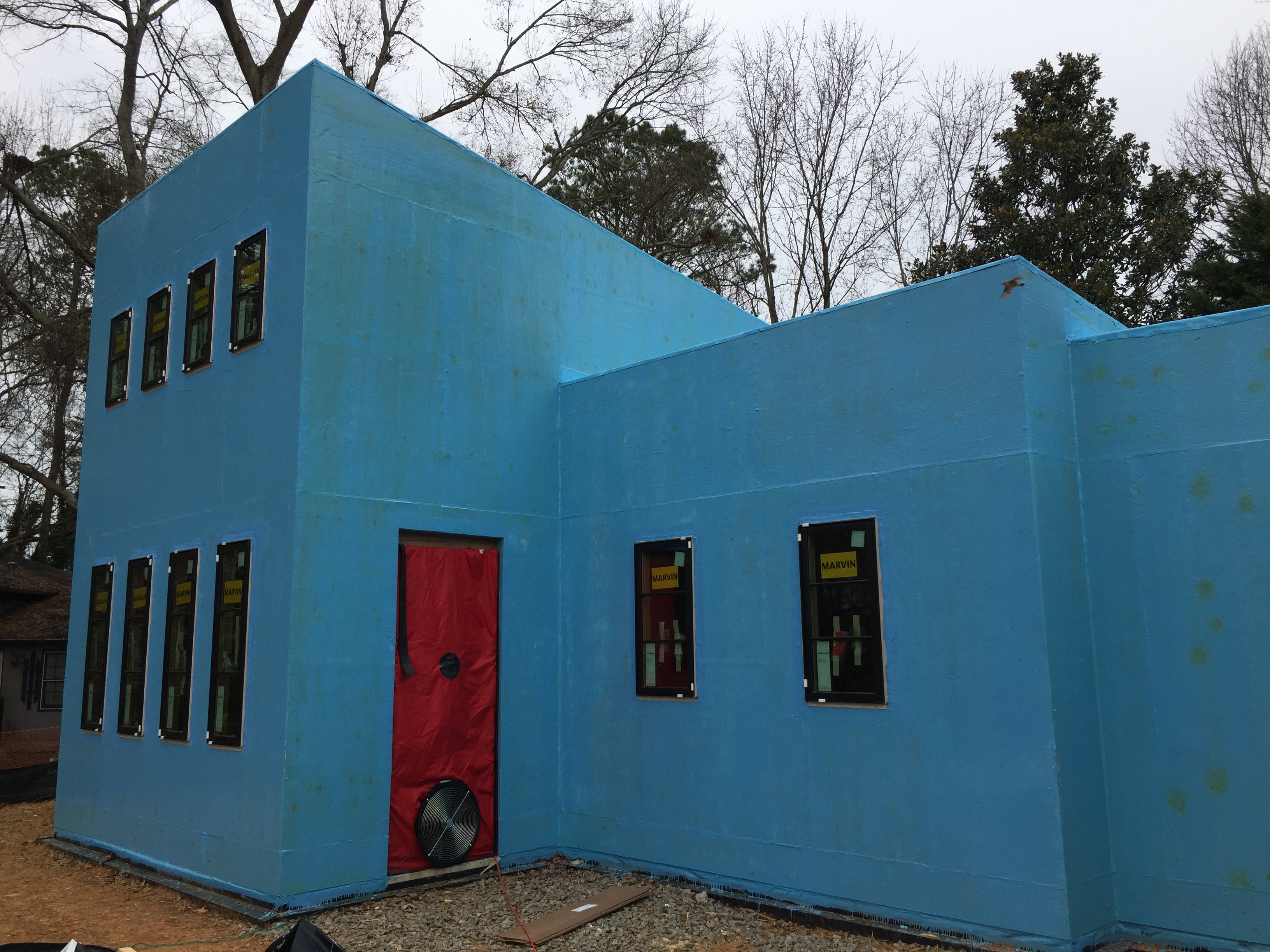 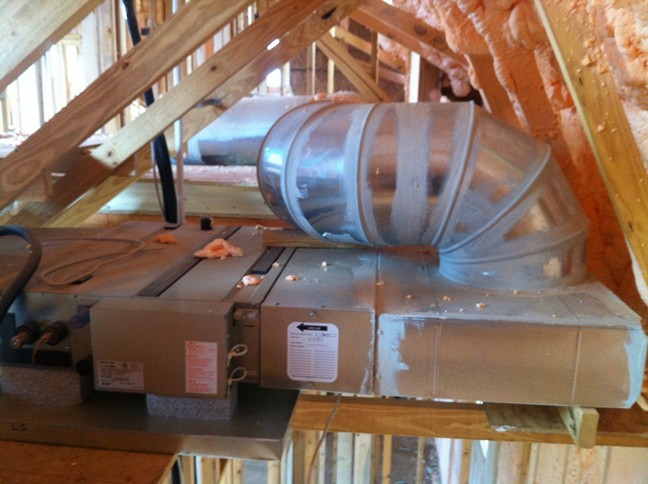 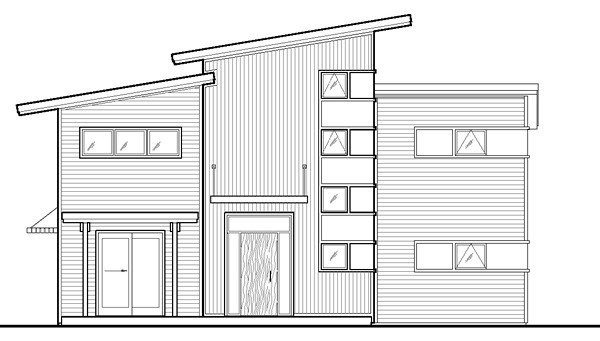