A near perfectly airtight contemporary home in Marietta, GA. Discussing the testing, the results, and how it was achieved.

The tightest building envelope we have ever designed or built was our own Tiny House project in Florida. It had a volume of 6,000 cubic feet and a surface area of approximately 2,000 square feet. The final air leakage test (measuring infiltration and ex-filtration via a blower door) results showed an air exchange rate of 0.4 ACH50 (Air Changes per Hour at 50 Pascals). This means that if the house is under a pressure equivalent to a 20 mph wind blowing directly on all sides of the building, then 40% of the volume of air inside the house would leak through the cracks and gaps in the span of one (1) hour.

We also ran a blower door test before and after the rough-in stage of the project, when the plumbing, HVAC and electrical subcontractors would cut holes in the building shell (a.k.a. enclosure) for their pipes, wires, ducts, etc. We do this in order to measure how well we installed the air, water, and vapor control layers, and sealed the penetrations before installing the continuous exterior insulation (thermal control layer) on the exterior of the enclosure. The results of these two leakage tests were the same for the Tiny House, which means we perfectly sealed the penetrations! The leakage at both stages was 0.2 ACH50.

At the time we tested the Tiny House, the Florida Energy Code allowed a maximum infiltration rate of 7.0 ACH50 at final testing, which is 1,750% higher than what we achieved.

The smaller the volume of a building, the more difficult it is to achieve a low leakage rate like the Tiny House. For example, when the house is under 50 Pascals of pressure (during blower door test), 2,400 cubic feet of the air inside the Tiny House is exchanged with outside air in one hour. That's not a lot of air. On a house with 25,000 cubic feet of volume, like the Contemporary High Performance Home we're now building in Marietta, GA, the same result (0.4 ACH50) would mean that 10,000 cubic feet of air leaks in one hour under 50 Pascals of pressure. That is four times the amount of air than the TIny House exchanged during the test. If we were to add up all the cracks and gaps and make a single cumulative hole, using the Effective Leakage Area calculation (CFM50/18), the ELA (i.e. the hole) in the Tiny House would be smaller than the Marietta home.

THE TINY HOUSE MAY HAVE MET ITS MATCH

This past Friday, we performed the pre-rough-in air leakage (Blower Door) test of the house in Marietta, and the tightness of the enclosure pushed the limits of the testing equipment. On the smallest stock settings of the equipment, the gauge that reads the airflow in and out of the enclosure while the building is under negative pressure, read "TOO LOW". This meant that the actual leakage is even lower than what the gauge could pick up.

The gauge (manometer) can read as low as 50 CFM50, when used with a standard blower door fan before it flashes "TOO LOW". When paired with a smaller duct tightness testing fan, the gauge can read as low as 10 CFM. For the next leakage test, the energy rater, David Wasserman, will be using that smaller fan to get a more accurate result.

If we were to accept the results we got using the larger fan, 0.12 ACH50, the house would leak 3,000 cubic feet of air in one hour under 50 Pascals of pressure. When we test with the smaller fan, I'm predicting that the result will be between 0.05 and 0.1 ACH50.

While most builders would be more than satisfied with a result this low, we need to know where and how big the gaps are. Where there's a leak, there's a path for unwanted bad air and moisture to get in, and good conditioned air to get out. If large enough, it's also a path for critters (insects, etc.).

To find the leaks, we used a small fog machine that you might find at a performance theater and filled the house completely. We then switched the direction of the fan to pressurize the house, forcing the fog out through the cracks. This turned out to be very effective.

We walked around the house looking for fog, and found trickles coming from around a few windows, and at the wall-to-roof transition, but found that most of the leakage was happening at the blower door frame that is installed in the front door. In fact, there was a surprising amount of fog pouring out around the frame.

The fog also showed a surprising amount of leakage at a swinging patio door that was installed the day before. After we double-checked that the door was closed and locked properly, we noticed it was still leaking more than we expected. All of the windows and doors are by Marvin, and we have never had anything of theirs leak that much. So, we took videos and pics and moved on. Later that day, the window/door installers came by for a follow-up and discovered that the door was missing shims, which caused the door to not seat properly within its frame. This opened up a relatively large gap on one side of the door that easily explained the leakage.

The leakage at the blower door frame will be addressed by doing a better job of sealing the perimeter where it meets the door opening, and the identified leaks will easily be plugged before the next air leakage test after rough-in. The swinging patio door will be pulled out and reinstalled, with shims!

Assuming our estimate is correct that using the smaller fan will result in leakage between 0.05 ACH50 and 0.1 ACH50, the total amount of air leakage in the Marietta project will be less than the Tiny House. At the lower end of that range, the amount of air leakage will be 1,250 cubic feet of air in one (1) hour, which is half that of the Tiny House.

HOW WE ACHIEVED NEAR PERFECTION

The house is a wood-frame house on a slab-on-grade. The walls and roof are completely sheathed in 1/2" CDX plywood. Over the wall sheathing, we applied a 40-mil thick layer of liquid applied flash and wrap system, called Blue Barrier, by PolyWall, and over the roof sheathing, we installed DeckGuard HT, a peel-and-stick product by PolyGuard.

Where the bottom sill of the exterior walls meet the slab, we installed a continuous EPDM gasket, by Conservation Technologies, and then sealed the joint between the sheathing and slab with PolyWall 2200 Joint and Seam Filler on the outside before covering that joint with a continuous termite-proof tape, TermF, by PolyGuard. 2200 was also used at all plywood seams and to cover every nail.

The wall to roof transition of the entire structure is uninterrupted, meaning there are no rafter penetrations. The overhangs will be built on top of the peel-and-stick roof membrane and encapsulated within the 6" thick continuous layer of rock wool on the outside of the roof structure.

All penetrations in the slab are sealed with a liquid flashing product from PolyWall, and all doors and windows are sealed with Prosoco's vapor open AirDam sealant between the window frame and the rough opening.

LG Squared, Inc. is the architect of record and the construction project manager for this project. For more info on this project and other best practices of architecture, building science and high performance homes, check out our Instagram, Facebook and YouTube Channel 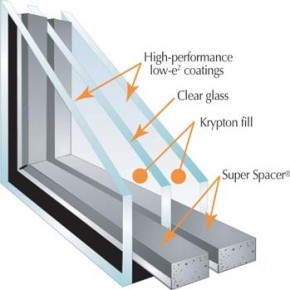 The 3 Most Important Strategies to Achieve an Energy Efficient Home